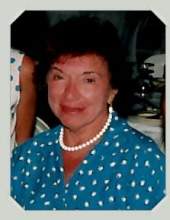 Toni was born in Princeton, NJ in 1921 to Jennie K. and Daniel M. Caruso. Her father emigrated from Italy and became a fine custom tailor in Princeton and was one of the first tenants on Palmer Square. Her mother continued the business after he died in 1951 until her retirement in 1982, at age 91. Not surprisingly, Toni was always smartly dressed.

Together, her parents were leaders in the Italian-American community in Princeton and at St. Paul’s Church. She learned from them the values of faith, family, hard work, civic responsibility and the importance of a good education.

Toni attended St. Paul’s School, graduated from Princeton High School in 1939 and was the first in her family to earn a college degree, graduating from the New Jersey College for Women (Douglass College), Class of 1943. She was selected for a National Science Foundation graduate summer program at Kent State University in 1966. She later earned a Masters Degree in Education/Counseling from Trenton State College. She was a member of Phi Delta Kappa, a professional association for educators.

Toni worked for the Gallup Poll conducting interviews. She was the director of one of the first community based correctional programs for young girls in the late 1960s. As a counselor at Mercer County Community College she was instrumental in shaping and guiding young college students’ lives, many of whom were the first in their family to attend college. She later worked as a school social worker in Dunellen, Dutch Neck and Bordentown, NJ and in Neshaminy, PA.

Toni lived in Pennington, NJ for 45 years where she and her husband Gene raised their family. She was an active member of Saint James Church where she was a member of the Guild, helped establish a parish library, served on the scholarship committee, and chaired and/or worked on countless church dinners and events. Living across the street from the Little Church, their home was often a social gathering place after Sunday Mass.

Toni volunteered at the local schools, served on the PTA, and was active in the efforts to regionalize the Hopewell Valley School System. When her son went to join Cub Scouts and there was no more room, she became a Den Mother, providing an opportunity for a half dozen more boys to join Cub Scouts. She was an active supporter and volunteer throughout her sons' scout experiences and saw them both achieve the rank of Eagle Scout.

Toni and Gene were among the founding members of Penn Brook Swim Club in 1957. She helped her sons become good swimmers and cheered them on as members of the Penn Brook Swim team. She later watched her granddaughters learn to swim there as well. Her family maintained its membership continuously for more than 50 years.

In addition to her parents, she was predeceased by her first husband, Eugene “Gene” F. McGuire in 1982.

Toni met her second husband Gordon T. Godly, at a church prayer group in Pennington. She delighted in saying..."What do you think I was praying for?" Toni and Gordon were married in 2004 and since then have lived in Fort Collins, CO, where her son Dan and his family live. She and Gordon spent nearly 20 wonderful years together. He was the tall, distinguished British gentleman and she the zesty Italian. Together they made a wonderful pair.

Toni McGuire lived a long, full and loving life and set an example for the generations that followed and was the “wind beneath their wings.”

In lieu of flowers, the family suggests consideration of a contribution to: Dorothea’s House, 120 John Street, Princeton, NJ 08540, dorotheashouse.org which was formed in the early 1900s to serve Princeton’s growing Italian Community; or Womanspace, Inc. 1530 Brunswick Ave., Lawrenceville, NJ 08648, womanspace.org, where her granddaughter works as a counselor.

Visitation will be Tuesday May 21st at Blackwell Memorial Home, 21 N. Main St. Pennington from 5:00 to 7:00. Mass of Christian Burial will be celebrated Wednesday May 22nd at 11:00am in St. James Chapel. Burial will be private.

Arrangements are under the direction of Blackwell’s Funeral Home, Pennington.
To order memorial trees or send flowers to the family in memory of Antoinette "Toni" Caruso McGuire, please visit our flower store.