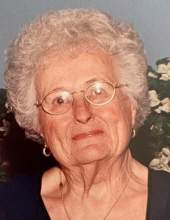 Bruna Roman, 98, passed away on Monday, March 23, 2020.
Born in Poffabro, Italy, she came to the United States as a young child, and was a lifelong resident of Pennington, NJ. A graduate of Hopewell Valley Central High School, Bruna worked at General Motors building planes during the war. She went on to work at and retire from Cointreau, in addition to running the family business, Valentino Roman Septic.
Bruna was a devout Catholic and member of St. James Roman Catholic Church in Pennington and member of the Pennington Grange. Most of all, Bruna was devoted to her family and loved to sew and crochet for them all.
Bruna was the daughter of Felicita and Salvatore Roman. She was predeceased in death by her husband Valentino, son Jimmy, and sister Gina Gentilin. Bruna is survived by her daughter, Dolores Roman-Slater; son, Thomas Roman (Constance); grandsons, Sean Roman (Lora-Lee) and Anthony Roman; granddaughters, Tammy Roman-White (Robert), Jenn Roman (Suzi) and Alysha Roman-Slater; great-grandchildren, Tyler Roman, Roman White, Nichole White, Robert White, and Brady White.
Services will be private.
In lieu of flowers, donations in her memory can be made to St. James Roman Catholic Church, Pennington, NJ.
To order memorial trees or send flowers to the family in memory of Bruna Roman, please visit our flower store.