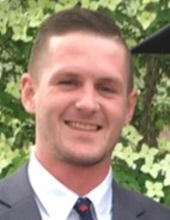 Jackson McGrath Place of Hopewell NJ , passed away at home on October 7th, 2019. A lifelong resident, Jackson graduated from Hopewell Valley High school in 2012. While at Hopewell Valley he captained the Varsity Wrestling team earning MVP honors his senior year, and also was part of three county Championship teams. He later went on to West Virginia University, graduating with a degree in Recreation Parks and Tourism. While at West Virginia, he was also Vice President of his fraternity Tau Kappa Epilson. He was currently working for Bank of America Merrill Lynch, in the Equity department.

To all who knew him, he was full of life, enjoying friends and family to the most….each and every day.

He is predeceased by his Paternal grandparents Dr Charles Place and Ruth Place. He is survived by his Maternal grandparents, Richard and Margaret Breimann of Manchester NJ, his parents John and Karen Breimann Place, of Hopewell, brothers Adam of Ewing and Cooper of Hopewell. He is also survived by a great aunt, several aunts and uncles, and many cousins and loving friends who will miss him terribly.