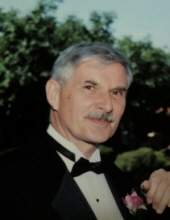 James R. Scheers, 84, of Hopewell died on Saturday. He was born in Manhattan, New York and resided there for over 30 years before moving to New Jersey. A diehard New Yorker, he ended up loving small-town life in Hopewell, living there with his wife and family for over 43 years.
James’ career was dedicated to public service. He graduated from Manhattan College with a Bachelor of Science Degree and from Fordham University Graduate School of Social Services Certificate Program for Supervisors in the Public Social Services area. He was employed by the NYC Human Resources Administration, Special Services for Children, Office of Fiscal Management & Budget, as Deputy Director, appointed to that position by then Mayor Koch. He retired after 27 years of service.
He served in the U.S. Army from 1959 to 1965. A fluent speaker of German, he served part of his time with the Army on special assignment with the VII Corps, Judge Advocate General’s office in Stuttgart, Germany.
While in his twenties he made his first parachute jump in Lakewood, New Jersey and continued this sport in Massachusetts and other locations in New Jersey.
Throughout his entire life, he was an artist, specializing in landscapes and still life. Upon retirement, he enjoyed being a member of the 55 Plus Club in Princeton for many years as well as going on trips to Europe with his wife, where they visited all of the art museums.
He is the son of the late Kathleen (Sally) McCormack and James E. Scheers. He is survived by his wife of 56 years Rose P. (Adler) Scheers, their two sons, James E. and his wife Joyce Victor of Wilkes Barre, PA and Peter and his wife Amy of St. Louis, MO, their daughter Karen Sevener of Centreville VA, and three grandchildren, Tyler, Natalie Marie, and Victoria Grace. He is also survived by his brother-in-law Robert Adler of Peoria, AZ and his wife Lillian, his sister-in-law Marie Maguire of Long Island, NY, many nieces and nephews, and special friends, Barbara and Bob Greiner.
Funeral services and burial will be private at the Washington Crossing National Cemetery, Newtown, PA.
To order memorial trees or send flowers to the family in memory of James R. Scheers, please visit our flower store.