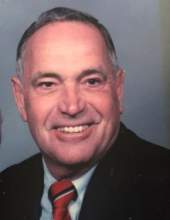 He is preceded in death by his parents, Latham Burberry and Margaret Dickinson Gray, his sister, Barbara D. Gray, and a grandson, James V. Haggerty, III. He was the loving husband of Margaret Elizabeth (Betty) Stoetzer Gray, who died November 2, 2018 after 62 years of marriage.

He was born in Utica, New York on November 22, 1928. During his youth, he traveled extensively with his family; living in Florida, Pennsylvania, Virginia and Michigan. He was graduated from the Michigan Technological University in 1949, and employed as a mining engineer by Bethlehem Steel Corporation at its underground coal mining operations in Fairmont, West Virginia. In 1951, he served two years in the U. S. Army in Korea. After his service to his country, he held senior engineering and field management positions in West Virginia and, in 1967; he advanced to Bethlehem Steel's Mining Department in Bethlehem, Pennsylvania. He completed the Harvard Business School's Advanced Management Program in 1970. He managed Bethlehem's very vast coal mining operations for more than ten years before retiring from Bethlehem Steel in 1983. Later that year he was a volunteer International Service Corps consultant to the Turkish coal industry. In 1984, he was president of Gates Engineering Company in Beckley, West Virginia. He retired from Gates Engineering in 1986.

In 1987, he and his wife built their home in The Forest in south Fort Myers, Florida. He was an active member and past president of The Forest Property Owners Association and a member of The Forest Country Club. He was an avid golfer and traveler for many years.

Latham will be greatly missed by his family and friends.

A memorial service will be held on Saturday afternoon, November 30, 2019, at the Blackwell Memorial Home, 21 North Main Street, Pennington, New Jersey, after which his remains will be interred next to his beloved wife, Betty, in a columbarium located in the Sarasota National Cemetery, Sarasota, Florida. Those who desire may make memorial contributions to the Alzheimer’s Association in memory of Latham’s wife Betty.
To order memorial trees or send flowers to the family in memory of Latham Burberry Gray Jr., please visit our flower store.