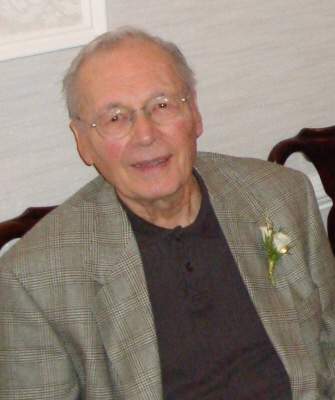 Paul Crawford Scheirer, Jr. went to be with the Lord on May 4, 2022.
Paul Scheirer was born to the late Rev. Paul C. and Elizabeth Scheirer, in Bell Rose, NY. Father of one beloved son, the late Paul Crawford Scheirer, III, he is survived by his University sweetheart, wife of 70 years, Martha Daniels Scheirer, his daughters Deborah (Christopher) McKinney of Downingtown, PA and Sandra (Christopher) LaCasse of Pennington, NJ and daughter-in-law Margaret Scheirer of Syracuse, NY. He is survived by 7 grandchildren - Sean McKinney (Nadia), Kathryn Scheirer Hopkins (Corey), Lisa McKinney Victorius (Jared), Jim Scheirer, Taylor Robinson, Cassandra Robinson, and Estefan Paul LaCasse. He is survived by 4 great-grandchildren - Jaelyn McIntosh, Davis Victorius, Jared Victorius Jr. and Mia Jane Hopkins.
He is survived by brother James Scheirer, sister Elizabeth (Dennis) Canfield, sister-in-law Mary Scheirer and many nieces and nephews. He is preceded in death by brother Rev. Francis Scheirer, sisters-in-law LaRue Scheirer, Edna Parker, Jean Bower, and Ruth Harrington.
He grew up in Lykens, PA, then graduated from Pottstown High School, Pottstown PA. He earned a BA in History from Ursinus College and a Master's degree from University of Pennsylvania. While at Ursinus he was a member of the track team and helped to start a Cross Country team.
Paul served in the U.S. Army during the Korean Conflict. He taught History and Driver's Education for 37 years in Ewing Township, coached Track and Cross Country for 35 years, and was Coach of the Year several times. It was said at Ewing High School, "Paul not only teaches citizenship, he lives it!" He was voted into the Ewing High Athletic Hall of Fame in 2003. Always active in his community, he was president of the Ewing Township Education Association, President of the PennBrook Swim Club, served on the Pennington Borough Council, active in local politics, served on the Planning and Zoning Board and volunteered for FISH. He was a member of the Senior Advisory Board for Hopewell Valley. Paul was always committed to his faith, and was a very active member of the Pennington Presbyterian Church. He served as a Deacon and an Elder, taught Adult Bible School, sang in the choir, was leader of the Senior High Group, volunteered at countless Harvest Festivals and served on many committees. Paul was an avid reader, an enthusiastic bowler, golfer, tennis player and bridge player. Paul moved to Pennswood Village in May of 2007, where he and his wife enjoyed a leisurely life with many new and old friends. They played Bocce, duplicate bridge and attended concerts there. Paul ruled at Wii Bowling and Trivia right up to the end. In lieu of flowers, please send contributions in his memory to Pennington Presbyterian Church to fund his passions: Christian Education and Music.
To order memorial trees or send flowers to the family in memory of Paul Crawford Scheirer, Jr., please visit our flower store.