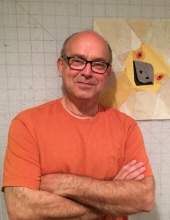 “Be Rich in good deeds, and be generous and willing to share” 1 Timothy 6:18
Paul Richard Hallinger, Jr, age 61, born on December 3, 1958 following a short brave battle with cancer, died peacefully in the presence of his loving husband, on Sunday, April 11, 2020 at Capitol Health Systems Hospital in Lawrenceville, NJ.
Paul was a long-time resident of Pennington, NJ. Paul graduated from Hopewell Valley Central HS, and did his undergraduate work at Trenton State College, now known as The College of NJ, where he received his BS in Psychology. He then went on to the University of California, Davis where he received his Master’s degree in Sociology. Paul’s career was varied and colorful starting in 1990 with the Social Security Administration as a Claims Representative in Sacramento, CA
Then from 2002 to 2019 with the SSA as a Senior Policy and Budget Analyst in the Central Office, in Baltimore, MD
And after many years of hard work Paul retired April of 2019. Paul’s early working carrier also included a position for several years, in the Department of Radiology working alongside of his aunt Linda Wilmer Pelican Amantia at the Medical Center of Princeton NJ.
Both his schooling and career took him to many states including, California, Missouri, Maryland, and Pennsylvania
Paul’s first love was spending time with the dogs he had over the past 31 years, including Behr, Freud, Cody, and Hawthorne.
Paul’s second love and the one that gave him great artistic pleasure, was quilting. He was a quilter, pattern tester, mentor, speaker, and teacher. Paul was proud of his work but was modest when it came to accolades. He was frequently asked by designers and fabric manufacturers to test patterns or to create quilts to showcase designer fabrics.
Paul was a member of several local and virtual guilds. He was known as a talented, enthusiastic, and encouraging individual by both experienced and novice quilters. He briefly maintained a blog, Evildemondog Quilts, named for his beloved pit bull, Cody.
Paul hated the idea of selling his quilts. He only sold one in his life time, to an art department at a Pennsylvania college. Paul would rather give his quilts away to comfort a friend, a co-worker, or a stranger knowing that a handmade quilt imparts a sense of love as well as warmth. His quilts were given freely to mark milestones, accomplishments, or because someone happened to mention that they wanted one. The following excerpt from Paul’s blog seems to paint the best picture of his life and who he was and what he loved;
I have been with my one true love for 31 years now – our first date involved a trip to the dump…..“A true romantic that one”. We both remember the movie we went to see and the fact that I didn’t go home. And never left much after that either!
I took up quilting in 1992 or so – I had gone to Europe on a wonderful two week adventure and upon returning to the states blew out a couple of lumbar discs when I grabbed a suitcase out of the trunk of a car. Cross country flight and pain, not a good mix. So I was out of work for a few months and was going absolutely bonkers counting the ceiling tiles when a friend showed me how to cross stitch and then how to do quilt stitching by hand. I then asked her to show me how to make a quilt. I was using a lovely White sewing machine that I had bought at a ‘school over-ordered’ sale. I took it in for service and was amazed at the Bernina sewing machines, so I bought one!…and then another. And then another. I have three. Two embroider (another favorite of mine). And then I bought a Juki (I like it for the more industrial needs!).
My quilting is like my musical taste – punk funk other junk, classical jazz industrial pretty much anything I listen to and like. So I quilt things I like – I don’t confine myself to any particular style. I do tend to be a little ‘matchy’ with my fabric choices and tend to stick to one or two choices in a quilt – I personally feel that the fabric designer did what they did and I should let their expression stand relatively sound. When I look at some stuff produced by other quilters I just start hearing “One of these things is not like the other, one of these things just doesn’t belong…”. my own, personal aesthetic. I needed some level of cohesion.

Although he moved to the beach on retirement, he was not a fan. He moved there to indulge his husband’s wishes. Like a good husband, he made the best of it by buying a bike, eating at local restaurants, and retiring to his sewing room with four Berninas.
Lastly, he enjoyed repeatedly watching reruns of Doctor Who and Buffy the Vampire Slayer to the point of anticipating the dialog. Paul and the love of his life Michael were legally married on June 28, 2014, at Washington’s Crossing, Pennsylvania after many years of love and fidelity and commitment to one another.
Paul is survived by his loving husband for 31 years of Michael Wayne Wolfe of Ocean View, DE; his father Paul R. Hallinger, Sr. of Pennington, NJ; his sister Patti Hallinger Ford, of Lawrenceville, NJ; his Aunt Linda Wilmer Pelican Amantia and her husband Jack; Aunt Ruth Downs of Florida; Aunt Janet Grosse of New York; his nephews Ryan Ford of Lawrenceville, NJ; Tristan Wolfe of Tennessee; niece Candace-Tara Cook and her husband Cory Cook, and their daughter Sydney; and his beloved Sister Xena Hawthorne a/k/a Peanut, his beloved dog for 15 years.
Paul was the beloved son of the late Patricia (Wilmer) Hallinger, who preceded him in death in February 2019; he was the Brother-in-law of the late John Ford, who died in July 2018. He was also predeceased by his Father and Mother in Law Daryl and Carolyn Wolfe; and brothers in law Jimmy Dale Wolfe and Steven Wolfe.
And as shared by his husband Michael, over the course of 31 years, Paul threatened to come back to haunt me if I ever wrote an obit that followed the rules or was maudlin in any way. He once told me to tell everyone, “This is a life. One well lived by my own rules. And, along the way I found the love of my life and got to play with dogs. And quilt.” I often times asked who the love of his life was! I really liked the answer. And lucky me, I probably get to wrap myself up in a different quilt every night for the rest of my life. I love you Mr. Hallinger and I always knew who the love of your life was.
Contributions in Paul’s honor and memory may be made to Animal Rescue Inc., New Freedom, Pennsylvania, or to any local chapter of the American Cancer Society.
To order memorial trees or send flowers to the family in memory of Paul Richard Hallinger, Jr., please visit our flower store.