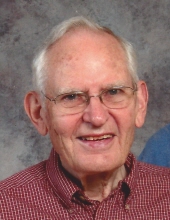 Halsey L. Allen III passed away Thursday, March 9, 2017. He was born on April 11, 1930 in Rhinebeck, New York, the son of H. Leonard Allen and Rowena Allen (née Dock) and grew up in Fitchburg, Massachusetts, where he attended Fitchburg High School. He then went on to study physics at the University of Massachusetts before taking his Master's Degree at Purdue University. He had a long and fruitful career working variously at the Princeton Plasma Physics Laboratory, Fermilab, and finally again in Princeton, at the University's Tokamak Fusion Test Reactor (TFTR).

He met Shirley Clapp, the sister of his University of Massachusetts classmate, fellow cross-country team member, and lifelong friend Dr. C. Edward Clapp in 1950. They married in September of 1952 and remained so for 64 years. They had a son, Jon Frederick, in 1968. Halsey and Shirley lived in many places ranging from Hopewell, New Jersey to Wheaton, Illinois, but spent over three decades in Pennington, New Jersey, before eventually moving to Newtown, Pennsylvania in 2015, where Halsey's parents had lived in their last years. Halsey and Shirley have attended First Assembly of God Church in Pennington since 1977, where Halsey served in a variety of capacities.

Halsey was known by colleagues, friends, and family to be a man of extraordinary faith, kindness, generosity, patience, honesty, and strong character who always met people where they were and brightened their lives. He was an adventurous soul and traveled widely with his family but also conducted professional trips to Russia and Japan. Among other things, he taught a variety of deeply-researched bible study classes, worked extensively with ISI (International Students, Inc.), was a member of the the distinguished physics society Sigma Xi, built model railroads, and was a confirmed Saint Louis Cardinals fan for for over 70 years.

He is survived by his wife Shirley, of Newtown, Pennsylvania and his son Jon Frederick, of Saint Paul, Minnesota, as well as a sister, Jane Williams, of Hillsborough, California, and a brother, Owen Allen, of Worcester, Massachusetts. A memorial service will be held on Wednesday, March 15, at 11AM at First Assembly of God Church,87 Route 31 , Pennington, New Jersey, 08534. Friends may call from 10AM until the time of the service. Interment will be private. In lieu of flowers, the family requests that a donation in his name be made to the Turning Point UMCH Food Pantry, Box 1446, Trenton, NJ 08607. Arrangements are by the Blackwell Memorial Home. For condolences, visit their website at www.blackwellmh.com.
To order memorial trees or send flowers to the family in memory of Halsey L. Allen, III, please visit our flower store.