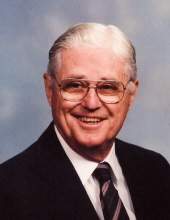 Theodore A. Pierson III, 96, passed away on December 9, 2017 in Princeton, NJ after a short illness. Ted was born on August 4, 1921 in Hamilton Township, NJ, the son of Theodore A. Pierson Jr. and Marion Eagle. He was raised in Hopewell, NJ with his sister Joyce (Selbie). Following High School in Pennington, he earned his aircraft mechanics license from Luscombe School of Aeronautics. He then attended Worcester Polytechnic Institute in Massachusetts where he earned his bachelor’s degree in aeronautical engineering and a commission as Ensign in the U.S. Navy in 1943. Wartime service took him to the Admiralty Islands in the South Pacific as Engineering Officer for the AROU-1 aircraft repair unit, which repaired carrier-based fighters and other aircraft for the US and British Pacific fleets. Ted returned home to NJ in November 1945 as a Lieutenant. In April 1946 he married Virginia Elizabeth McGuire and settled in Pennington, NJ to raise a family.
His working career started at Research Cottrell Co. in Bound Brook, NJ, but within a few years he began a long career at Homasote Co. in West Trenton, NJ, starting as plant manager and retiring as Vice President in 1987. While at Homasote he developed the Industrial Division, which designed and fabricated end-use products for industrial manufacturers, principally for packaging applications. Sideline businesses included Hessian Hill Nurseries, a partnership with George Moorhead in Pennington, and real estate development of Timberlane Drive and Penn View Heights. He was also a founding member of the Penn Brook Swim Club.
Another sideline of Ted’s was service to the local community through public office and membership in the Lions Club. Ted was elected to the Hopewell Township Committee for nine years, and he was a member of the Township Municipal Utilities Authority to design and install a regional sewage system. While on the Committee he served as chair of the building committee for the new Township Hall and State Police substation, township police commissioner, representative to the Stony Brook sewage authority, and finally two terms as mayor. As police commissioner he oversaw the transformation of a part-time police department to a full-time professional force. When he had some free time, Ted liked to organize ski vacations with his family and other families, and to play as much golf as possible—mainly at the Hopewell Valley Golf Club (co-founded by his grandfather) where he was a life-long member. He and Ginny loved to entertain, and many friends enjoyed Ginny’s fantastic cooking over the years.
In retirement Ted and Ginny lived for a while at the family home on Timberlane Drive before downsizing to condos—one in Naples, FL, for the winter, and one at Pennington Point for the summer. In 2004, they moved to a retirement community, Stonebridge at Montgomery in Skillman, NJ, where they were among the founding members. Ted’s beloved Ginny predeceased him in 2008. He is survived by his half-sister, Cynthia Edel (Sequim, WA); sons Thomas Pierson (Molly Davis), Steven Pierson (Denise), James Pierson (Nancy), and Jeffrey Pierson; grandchilden Clare Miller, Valerie Pierson, Haley Kirkpatrick, Lauren Giles, Brian Pierson, Elizabeth Eichfeld, Michael Pierson, Matthew Pierson, and Daniel Pierson; and eight great-grandchildren.
A memorial service is scheduled for 2:00 PM on Saturday, February 10, 2017, at Stonebridge (100 Hollinshead Spring Road, Skillman, NJ). Condolences to the family may be sent to Blackwell Memorial Home (cards or online at blackwellmh.com), 21 N. Main St., Pennington, NJ 08534.
To order memorial trees or send flowers to the family in memory of Theodore A. Pierson, III, please visit our flower store.